Forage & Feast in the North West Highlands by Sophie Fontes 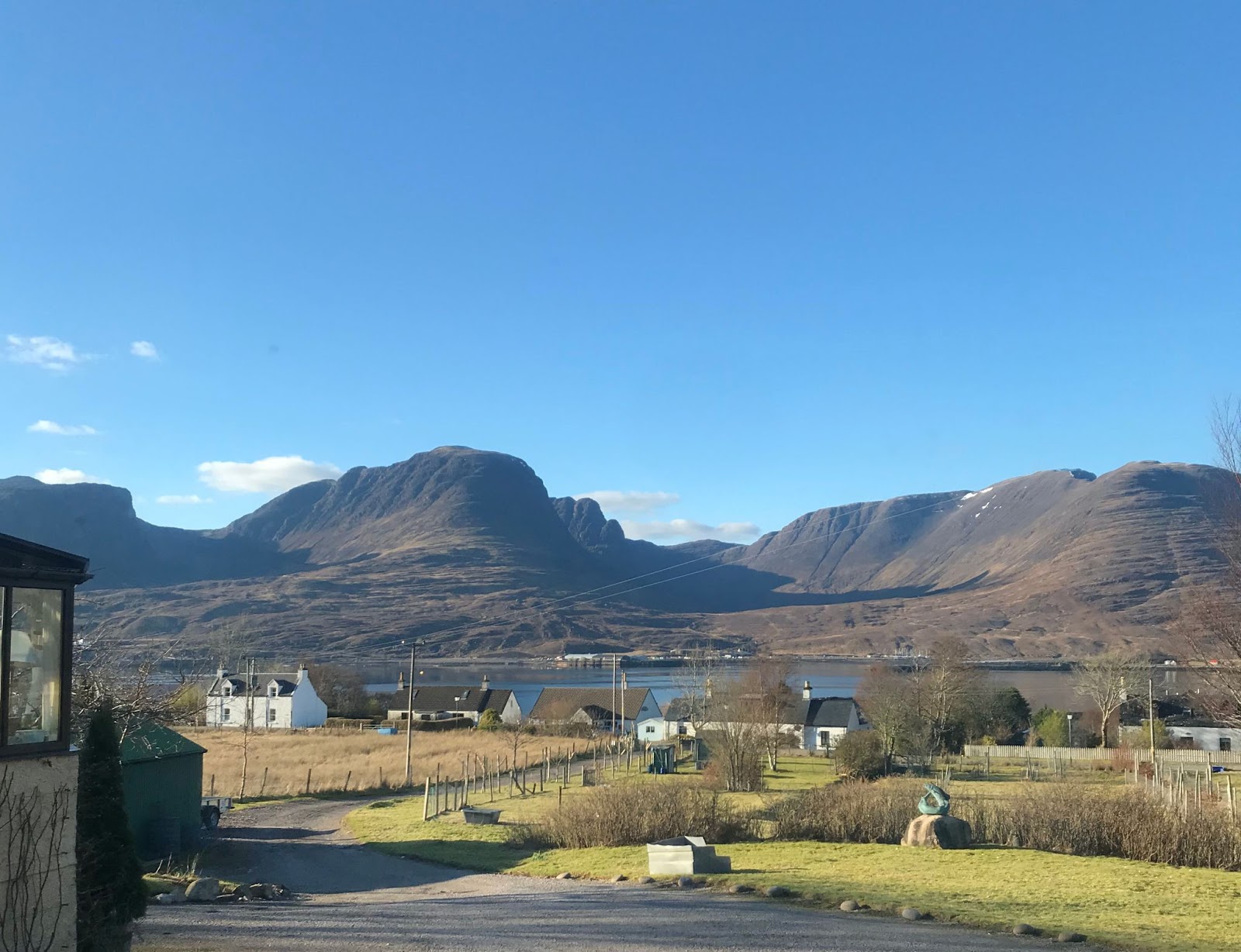 Late summer in the Highlands is a wonderful time to visit. The crowds are dispersing, the midges are (somewhat) thinning out and the hills are taking on a fiery orange hue as the bracken prepares for Autumn. We are in Kishorn, a small village on the North West coast, which you’ll struggle to find on an Ordnance survey map, but looks across to one of the most spectacular views in Scotland: the imposing Bealach na Ba.

Kishorn sits at the head of Loch Kishorn, an inlet from the Atlantic ocean, which means there’s no excuse not to swim on a bright summer’s day. If you want an example of hardy Highlanders, there is a local swimming club of women who swim every day across the loch (even through winter) which, at a mile wide, is no mean feat. Although we’re not so hardy as to commit to an hour long swim, the idea of a refreshing dip is tempting when the water is so still, so we head to the pebble beach after breakfast and dive (ahem, tentatively wade) in. 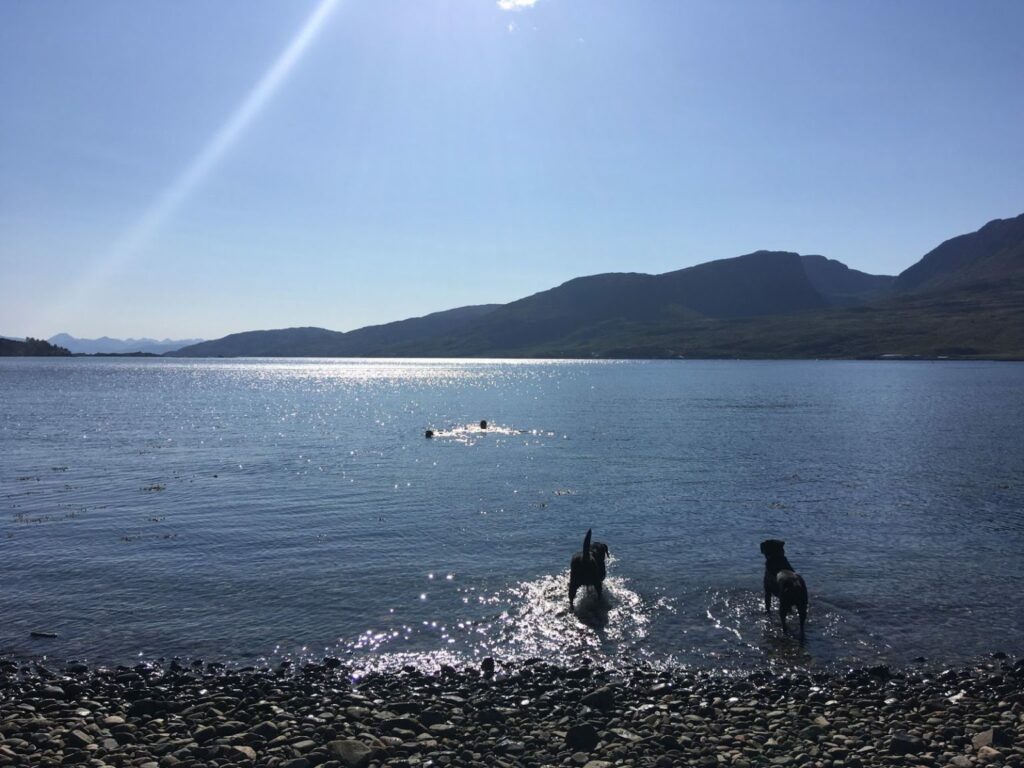 Swimming in Loch Kishorn (with some wary-looking dogs)

The famous Kishorn Seafood Bar is on the other side of the village and it’s a pretty walk through the dell to reach it. The bar is famous for its excellent local shellfish, although finding a table can be a battle during the height of summer, as it sits right on the NC500 route. 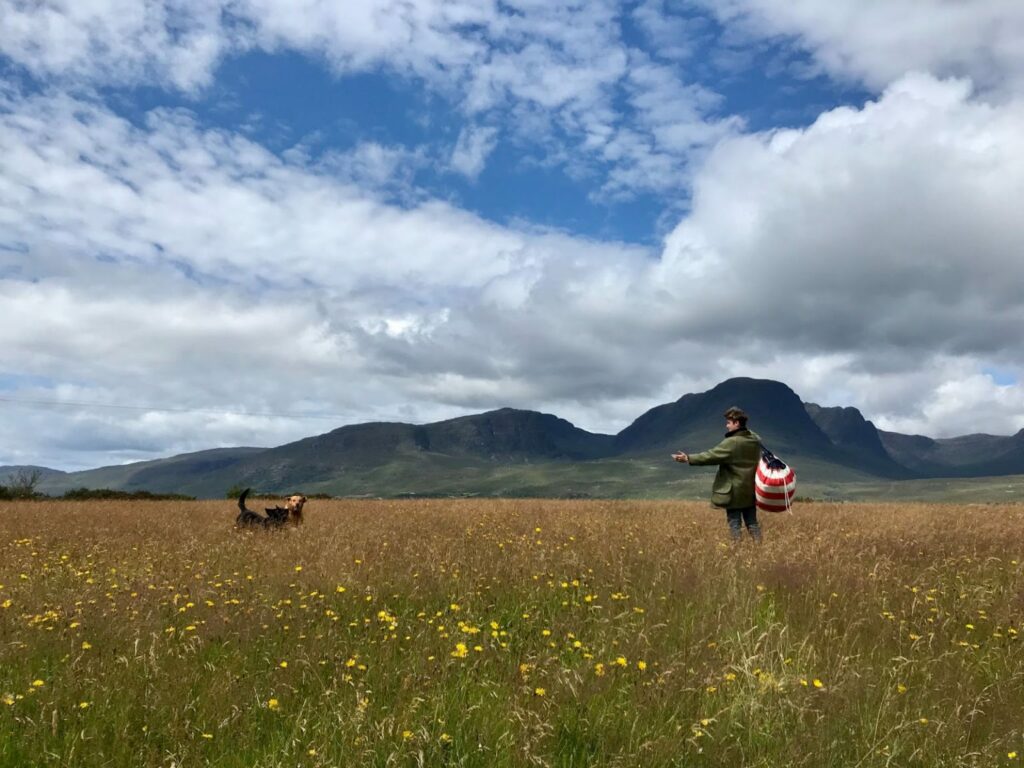 Heading across the dell to lunch 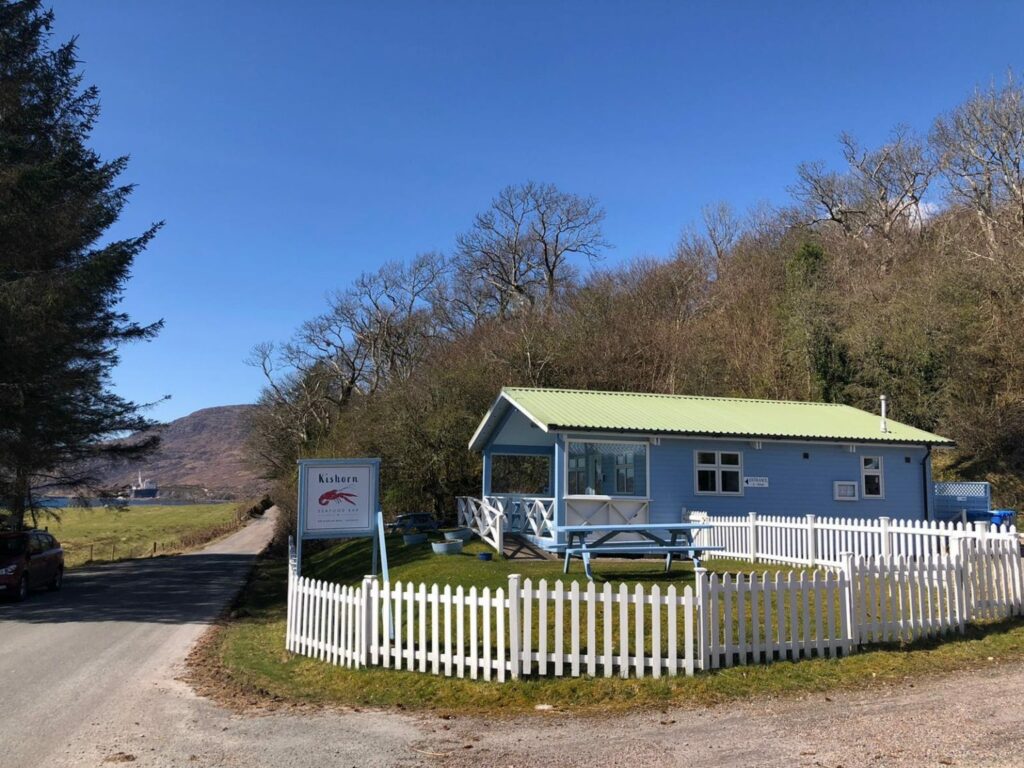 After lunch, we keep up the day’s seafood theme by stopping at a favourite mussel-picking spot on the way home. Now the tide is at its lowest, it’s the perfect time to pick what we can (if we can move fast enough to beat the dogs to the best looking ones), before taking them home to wash and prepare for dinner. 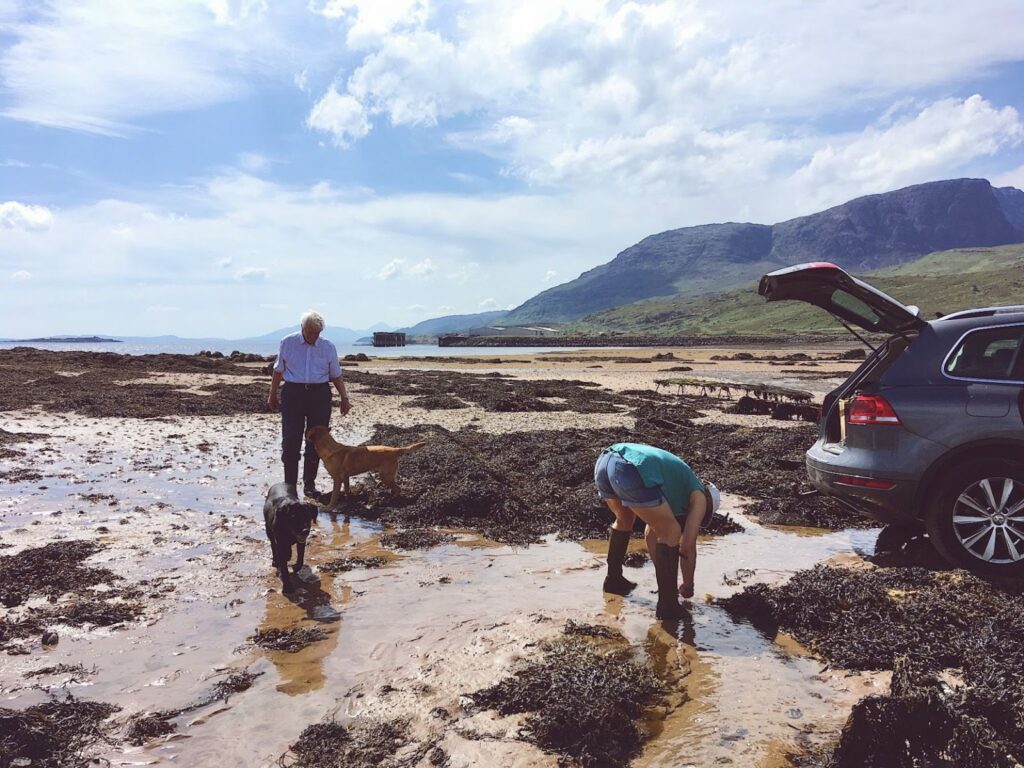 Picking mussels at our favourite spot

It’s widely observed that you can have every kind of weather in one day in Scotland, and after a glorious morning, the sky begins to cloud over and threatens to rain. The fungi has thrived on a wet summer so we take the opportunity to go with local artist Gillian Pattinson to her secret chanterelle spot. There’s an unspoken rule among foragers that you never reveal a location of chanterelles, so we’ve been sworn to secrecy (so I’ve kept these photos deliberately vague!). Armed with mushroom knives and an ingenious tupperware/string basket invention (crucially leaving both hands free for scrambling over streams and mossy rocks), it’s not long until we spot the golden flecks amongst the greenery of the forest floor. 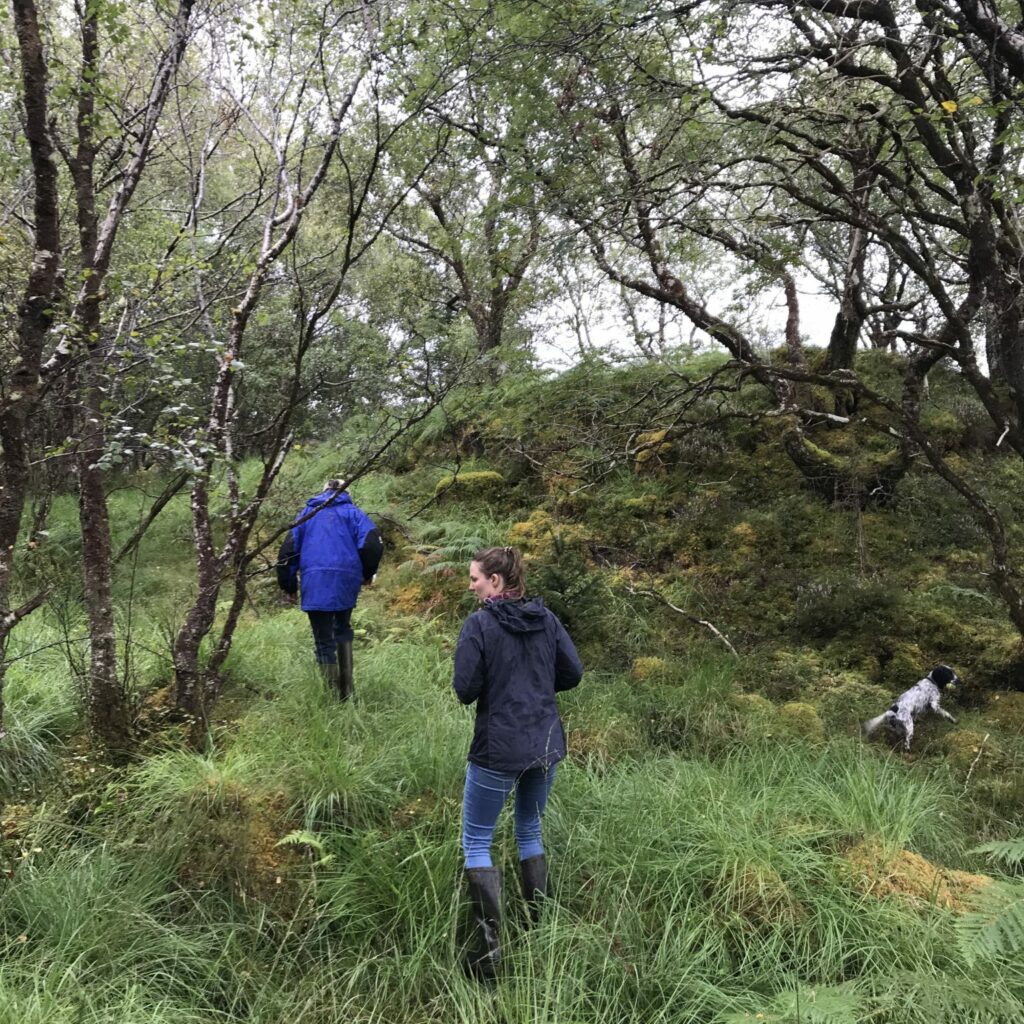 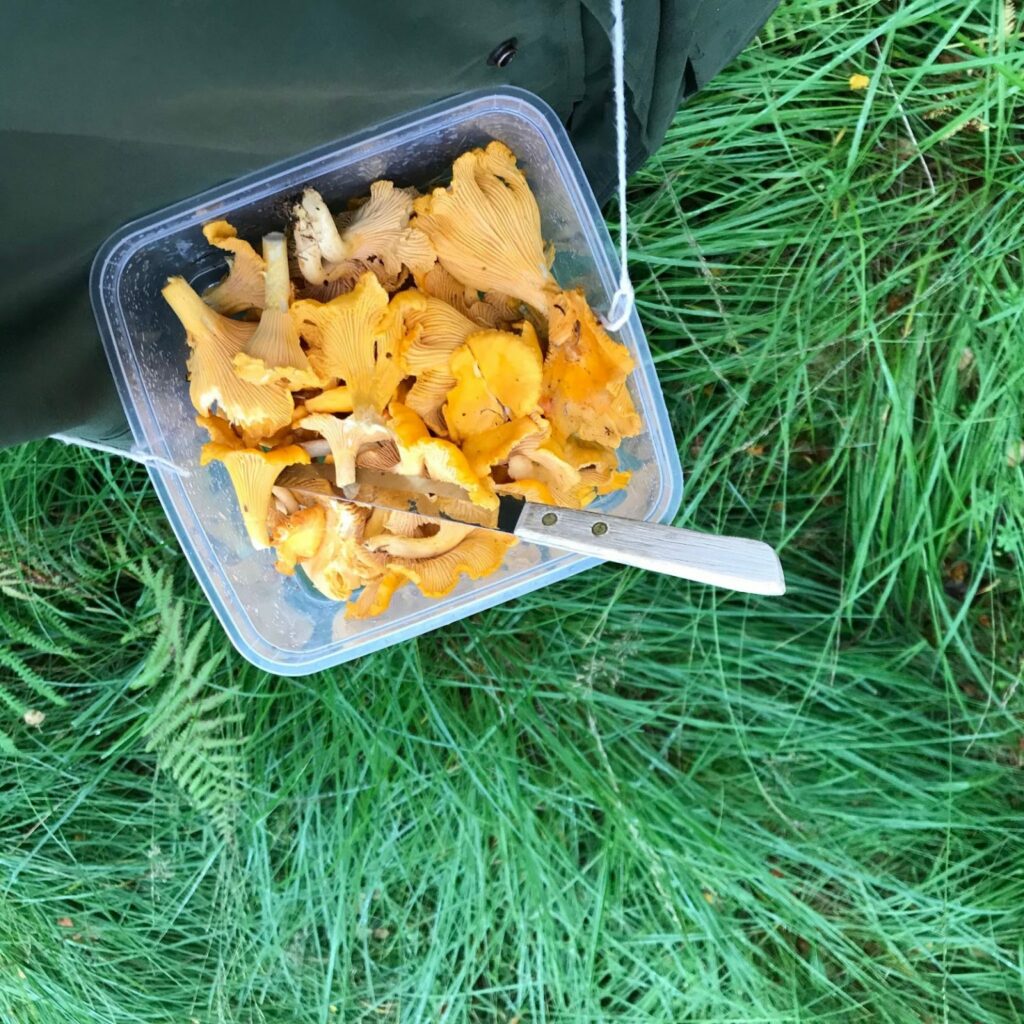 Foraging for chanterelle and the occasional hedgehog mushroom

Once a week, Kishorn receives a visit from Loopy, “the fish man”. Although Loopy is based in Applecross most of the week, every Tuesday his fishmonger’s shop goes mobile, travelling around villages in the local area to deliver whatever he has fresh in that week. It’s an ideal set-up for Kishorn locals who would normally have to drive an hour or so if they wanted to visit their local fishmonger. Fresh in this week are some large Scottish prawns which will go down very well as a starter to our mussels. Dinner is served as the sun sets over the Bealach. The colours change every evening depending on the weather and it’s often so cloudy you can’t see the mountains, but it’s never not a magnificent sight. 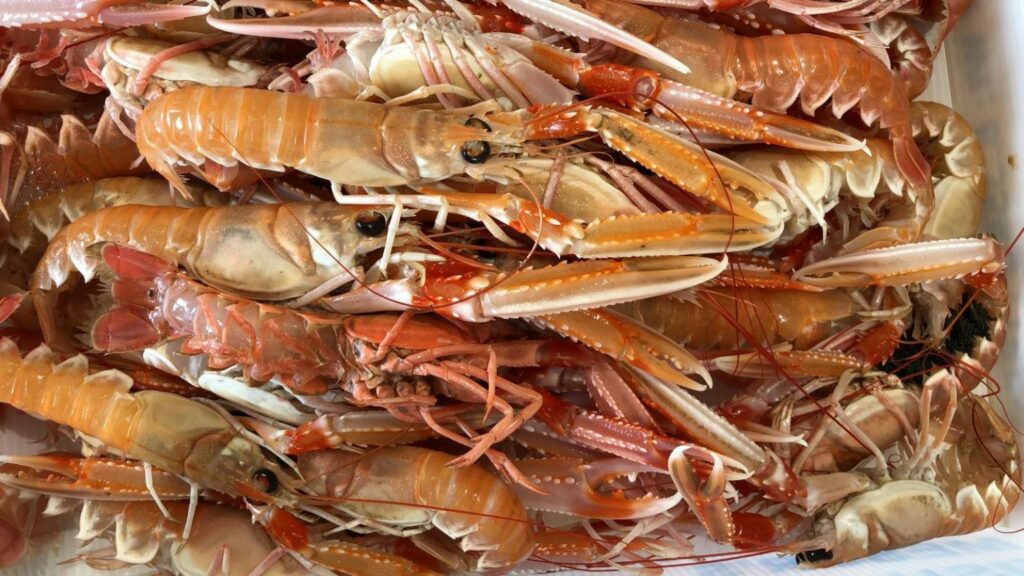 The produce on the West Highlands is some of the finest in the country and both the land and sea are bountiful at this time of year. Kishorn is slightly off the beaten path if you’re taking the NC500 route, but it’s well worth the detour for local art, delicious seafood and the best view in Scotland (and yes, I am prepared to argue with anyone who dares to challenge that fact). 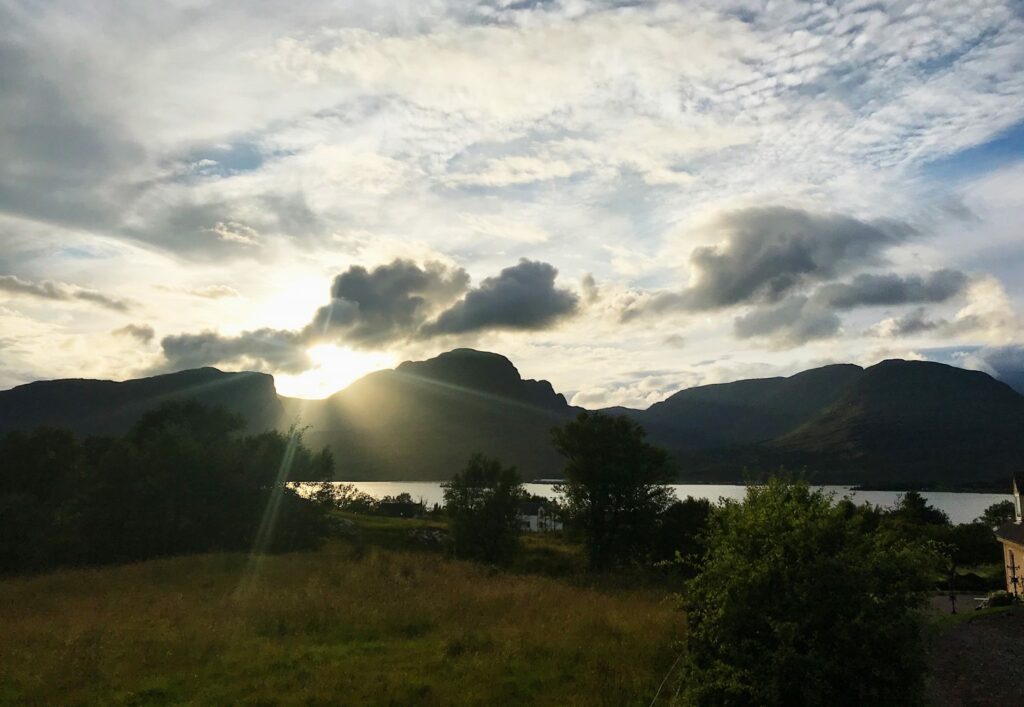 Do you have a seaside story to share? Sign up to the Discover Seafood UK Relay and become a coastal explorer this summer.